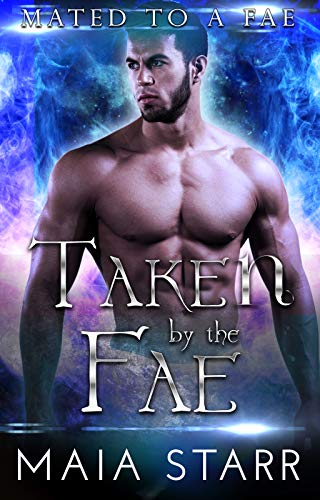 Taken by the Fae by Maia Starr

The Fae King has hired me to capture her.
The woman who is my fated mate.

The prophecy tells him that Celeste is a threat.
She’s the human and dragon hybrid that lives on Earth.
Prophecies mean everything in the Fae world.
A world that’s much more magical than the human world.
It wasn’t until I met Celeste that I realized how magical she was.
One touch and I knew she was mine.
Celeste doesn’t know of her power.
She doesn’t know who she truly is.
I have to claim her… to protect her sweet innocence.
Which means cheating the prophecy.
I can’t let the King harm her and drink her blood.
Celeste and I have to become one to defeat him.
We need to fight together.
Can the power of our fated togetherness win back her freedom?

Note: This is Book 1 in the series “Mated To A Fae”. All books in the series can be read as standalones with a HEA and no cliffhangers.

Celeste and Reagan, an odd couple to say the least. Reagan is our Fae and Celeste is our human, well sort of human but not really. Celeste is a dragon human hybrid shifter, a mouthful I know, although she isn’t aware of her abilities. Celeste has recently graduated college when she is bombarded by this handsome fae, that just so happens to kidnap her, yikes!

Reagan, one of the Scorched Elites, a sort of seal 6 team for the fae, is given a prophecy to locate a human dragon hybrid and bring her to the king. Sounds like a simple in and out task for the top-notched Scorched Elite, right…wrong! Reagan shows up to collect the human at hand when nature itself plays a cruel joke on the assassin and he is shown his fated mate.

This storyline is an instant love story, with all the fated mates’ talk, I only wish there were a little more passion. Everything kind of fell flat for me, but I honestly think its a personal issue. The story had no major structural problems and the grammar was fine.

One other let down for me was the ending, I was hoping for a different turnout, but what I got was a blah sort of let down feeling.

Let me know what you think about this one, I have decided to continue the series so I will let you all know how I feel about the next book.